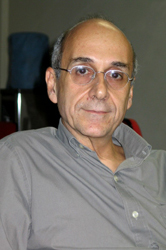 Paulo Roberto Feldmann graduated in Engineering from the School of Engineering of Universidade de São Paulo (1972); Master’s degree (1979) and Doctor’s degree (1987) in Administration by Getúlio Vargas Foundation, in São Paulo; currently, is a professor of the Department of Administration of FEA (Faculty of Economics and Administration), USP, and coordinator of projects of FIA – Administration Institute Foundation, in which he is also part of the Curator Board; was the innovation director of Microsoft as well as the director of the groups Sharp, Philips, and the banks Safra, Banespa, and Nossa Caixa; was the president of Eletropaulo and Iron Mountain, and a partner of the International Consulting Ernst & Young; is the president of the Council for the Pequena Empresa da Fecomércio. The following are the subjects he has investigated and/or published: Management of Enterprises in Latin America; Relation between Management and Innovation; Technology and Productivity of Enterprises; Small Enterprises. In the last five years he has had six articles published in indexed journals, and in the last four years he has presented three works in International Congresses: Russia, India, and Turkey; published two books, one of which had an English version called Management in Latin America, and which will be launched by Springer in the USA in June, 2014.